The clinic was open and it was an extremely busy day. But our most frustrating case was a patient two mountains away who had just delivered twins.  “Please send medicine that will stop the bleeding!”  Postpartum bleeding is a main cause of mothers dying, and this lady has TWO babies to care for.  Unable to hike to her, we told them that they needed to put her in a litter and carry her to the clinic.  Their minimal response made it clear that they were not going to do it.  There are cultural limits when it comes to a man touching or carrying a woman that has just delivered and is bleeding.  So, we sent some pills; they were all we had, and they were expired.  We also taught him how to rub her abdomen, hoping he would teach one of the ladies to do it.  But that was all we could do.

Two days later, Renda came walking out of the bush where she had delivered, holding both those babies, and dragging a little two-year-old girl along.  She was alone, except for her children.  Later Renda told me, “My husband only comes to give me these babies.  Then I have to take care of them myself.”  Her husband lives in town, a couple of days away.

Over the next weeks, we treated Renda with iron tablets and helped her regain some strength.  I could not imagine the situational anxiety that went along with this.  She was frustrated over having two babies and was exhausted.  Family usually helps out when there is a single birth, and Renda’s family helped sometimes.  Her sister would take one of the children for a week or two, but it was apparent that Renda was going to keep both babies. This is something our Kamea people rarely do!  Normally, right after birth, a mother will give one of the twins to another person, so she can focus on raising the other.  Most of our ladies are malnourished, and nursing two babies might mean neither of the twins would make it.  Unfortunately, the baby that is given away usually has a difficult time finding nourishing food.  Pineapple juice or sweet potato water (what they usually get when mother’s milk is not available) does not help babies to grow up healthy.  Sometimes the baby that was given away dies.

But not so with Renda.  She kept both of the babies!  We were able to help with that because of our Baby Milk Program.  At one point, she was feeding one by bottle with baby formula, and the other she was nursing.  We watched curiously to see how that would work.  The bottle-fed baby gained so quickly!  When the one was about 5 pounds heavier, we told her it would be best to supplement the other with the baby milk and start the bigger one nursing as well.  So now she has two very nice looking, healthy twins that are so hard to tell apart. 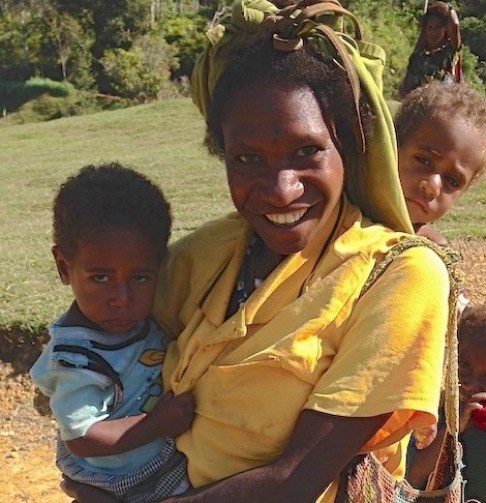 Renda & the twins: One in front, one in back

The Baby Milk Program has been an instrument that God uses to show that He cares even for the smallest ones.  Like the clinic ministry itself, it “opens hearts to the Gospel.” Renda is now faithful to attend Koditanga Baptist Church each Sunday.  She had never come before having the babies.  She is almost always on time, and always stays and visits afterwards.  It is like she now has a new family.  Even though she does not yet responded to the Gospel, she listens each week, and one day we pray the planted Seed will sprout.

On the way to church this morning, my granddaughter, Hannah, said to me as we were walking across the property, “Look, that lady has a baby on the back and a baby on the front.”  I told her, yes, that is Renda, and the twins are almost two years old now.  Hannah responded that Kamea ladies do not keep both twins.  I was so pleased to tell her that while it is true, now they can, and now they do.  We have helped with several sets of twins since Renda’s babies.  Isn’t it awesome to be a part of keeping a family together?